TECHNICAL TREATMENTS:
A research team recognized by Boehringer Ingelheim has developed a method to integrate tumor cells on a chip to test drugs

The awards are part of its parent company’s “Grass Roots Initiative” program, which enables the study of emerging science by championing early-stage life science companies, chief executive James Chiou (邱建誌) said during a meeting. an award ceremony in Taipei.

The six teams were selected by company headquarters from 169 companies that applied for the award, Chiou said.

Through this program, Boehringer Ingelheim not only encourages innovation in medicine, but also has the opportunity to learn more about high-potential start-ups, which gives it the opportunity to partner with new companies. and improve its research and development resources, Chiou said.

A team led by Sun Wei-lun (孫偉倫), a postdoctoral researcher at Taipei Medical University, has successfully integrated a section of a human cancer cell onto an integrated circuit chip specially designed to fit the cell, she said.

When the chip is charged with electricity, the cell responds, meaning a chip embedded in such a cell could be used to test different drugs to see which works best for treating various types of cancer, Sun said. 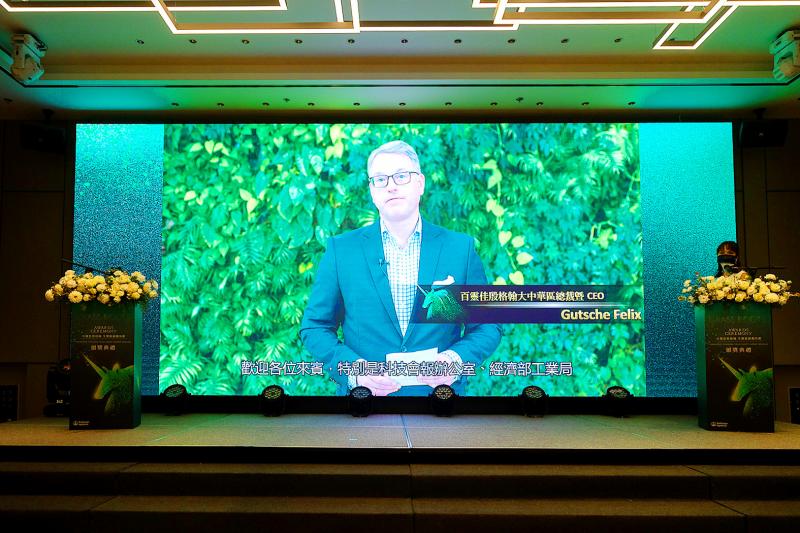 Each chip can be personalized, and it takes about three days to extract a cell and place it on the chip, Sun said, adding that the chips are provided by National Tsing Hua University.

Sun’s team has tested its technology in a trial in which lung cancer patients receive specific drugs, while their cells on the chips also receive the same treatment, and the team observes whether the results are comparable, Sun said.

Innovation is likely to change the development of medicine, she said.

Sun plans to start her own company and would be interested in cooperation with pharmaceutical companies, she said.

Another team led by Yang Kai-chien (楊鎧鍵), an associate professor at the Graduate Institute of Pharmacology at National Taiwan University, has discovered a new treatment for fibrosis.

The team found that TXNDC5, a resident protein of the endoplasmic reticulum, plays a key role in fibrotic healing, Yang said.

Unlike pharmaceutical companies that aim to cure fibrosis by giving patients compound drugs, Yang’s team has developed a DNA aptamer that can bind to TXNDC5, curbing the activity of the fibrosis-triggering protein, a he declared.

As TXNDC5 has been shown to be active in the development of fibrosis in many organs – pulmonary fibrosis, cardiac fibrosis and renal fibrosis – the potential for treatment is great, he said.

Like Sun, Yang also plans to start his own business, he said.

Annji Pharmaceuticals Co Ltd also focuses on the treatment of fibrosis. It has developed an experimental drug, dubbed AJ303, and aims to gain approval from US regulators to conduct a phase one human trial by the end of the year, President and CEO Wendy Huang said (黃文英).

The company chose to conduct human trials in the United States to include multi-ethnic participants so its drug could be used around the world, Huang said.

“As Boehringer Ingelheim is the standard treatment provider for pulmonary fibrosis, we are honored to gain their recognition,” said Huang, adding that she hopes there will be opportunities for collaboration.

“Although this is the first time the start-up support program has been introduced in Taiwan, our head office was impressed with the overall quality of work done by these Taiwanese applicants,” Chiou said.

While the program only accepted work in six areas – digital health, regenerative medicine, cancer, autoimmune diseases, fibrosis and gene therapy – the local unit found that among all projects from the 169 local applicants, the ratio work on cancer or fibrosis was relatively high, Chiou said.

“It’s understandable that many companies focus on treating cancer, as cancers get a lot of attention around the world, but I was a little surprised to know that so many companies or local teams are dedicated to the treatment of fibrosis, because the number of patients with fibrosis is not particularly high in Taiwan,” Chiou said.

Boehringer Ingelheim Taiwan’s parent company spoke to the six award-winning teams and advised them on business models, patent protection and sustainability, while also assessing whether to continue collaboration with start-ups, Chiou said.

The company has acquired treatment methods from local companies in the past, he added.

Boehringer Ingelheim is a research-driven company dedicated to innovative medicine and supporting life science start-ups by providing valuable mentorship, support and resources to help them progress, said the Chairman and CEO of Boehringer Ingelheim China, Felix Gutsche, in a statement.

Comments will be moderated. Keep comments relevant to the article. Remarks containing abusive and obscene language, personal attacks of any kind or promotion will be removed and the user banned. The final decision will be at the discretion of The Taipei Times.